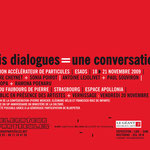 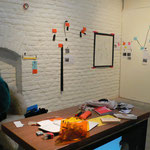 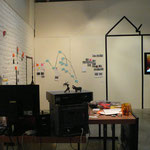 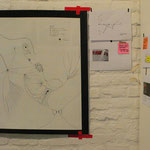 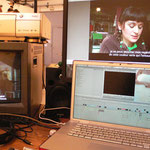 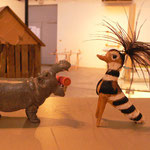 A series of manifestations was organized for the 50 Years Anniversary of the French Ministry of Culture. In that context, I was commissioned to participate by Franscisco Ruiz del Infante (currently Professor at Arts Décoratifs in Strasbourg) to an exhibition that took place two weeks before the official opening of the festivities. Instead of presenting an artwork, I decided to divert somehow the proposal: I set my atelier there and worked in the midst of the other art pieces, while also exhibiting the film editing process to the public.

What was at stake in the exhibition was an attempt of a dialog between three couples of artists (the pairings were formed for the occasion). The film I choosed to show was a road movie across Europe. A series of portraits give rhythm to the film, among which the one of Ramona Poenaru, who was my conversational mate in the exhibition.